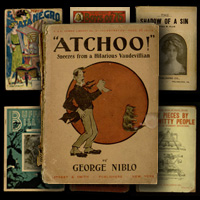 This collection brings together pre-Pulp era tales initially depicting scenes of early America, the Frontier, and the West. Ranging roughly from 1860 to 1930 these often serial publications record the attitudes of 19th and early 20th Century society: including racist, sexist, and ethnic stereotypes.  Also included in the collection are the precursors to "Dime Novels", known as "Story Papers", Mass Market Literature - containing non-fiction texts, some of which are manifested as textual series - in a variety of subjects - including "self-help" and "how-to" titles, and medical cures, and International Dime Novels - both translations of English language original texts, as well as native creations.  Digitization status: ongoing.
Please note some of the items in this historical collection may include outdated language and imagery that is insensitive, offensive, or which does not reflect the current values of Villanova University.  No endorsement is implied.
Saved in:
Show/hide more info.
Other
Clear
Showing 1 - 9 of 9 Items